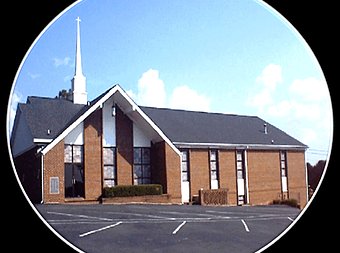 The history of Gill Creek Baptist Church dates back before the Civil War. According to descendants of forefathers, the members first worshipped at the Macedonia Baptist Church which consisted of a mixed congregation, both white and black. For many years, it was customary for slaves, if they worshipped at all, to worship with whites. In this manner, blacks could be kept under surveillance by their superiors. Rarely was there an entirely separate church for blacks.
During the Civil War, Macedonia was burned by Union Soldiers and had to be rebuilt at a later date. The war brought many changes of the time, so consequently, some laws were adopted and others repealed. After the passage of the South Carolina State Act or the Civil Rights of 1870, the black membership decided to secede from the mother church and form their own place of worship.

The Reverend Huriah Calvin Bynum was ordained through the Macedonia Baptist Church to be the leader or pastor of the new church. The church was organized in the year 1871 in a log cabin ten miles east of Columbia on the Old Camden Road in Richland County, South Carolina. The property for the church was donated by Mr. William Mingo Geiger and his wife, Mrs. June Portee Geiger, grandfather and grandmother of Mrs. Clotell Geiger Martin and Mrs. Minnie Geiger Taylor. The church derived its name from a nearby creek known as Gills Creek. The members who joined the church were baptized in this creek. The membership was very small at that time. During the early history of the church, ministers serving as pastors were the following: Reverend Kemper Berry, Reverend Huriah Calvin Bynum, Reverend Charlie Freeman, Reverend R. D. Glover, Reverend William Gordon, Reverend Hollman, Reverend Benjamin Jacobs, Reverend Elias Johnson, Reverend Isom Outen, Reverend Elijah Portee, and Reverend J. W. Rhodes.

In 1938 the Reverend William Gordon was re-elected as the twelfth pastor.
Under his leadership, the church had to be moved from its beginning site in 1942 due to the need of the property for the Fort Jackson Military Base. Mr. Simon Faust donated the property for the relocation of the church to its present site. Mr. Hammett Jones and Mr. Walter Williams negotiated with Mr. Faust to secure the property. Mr. James Martin was instrumental in helping to move the buildings to the Cushman Drive location.
Trustee Collie Roberts and Trustee Joseph Adams worked faithfully with this project. The Federal Government purchased property from Dr. H. D. Monteith for relocation of the Gill Creek Baptist Church Cemetery. Mr. Hammett Jones and Mr. Uriah Portee worked with Dr. Monteith in this effort.
During Reverend Gordon’s administration, many worshipers accepted the Invitation to Christian Discipleship. The church was remodeled and an Educational Building was erected in 1967. Licensed and ordained was the Reverend J. S. Gordon in October 1931 and Reverend Joseph Wallace in June 5, 1962.

The Gill Creek Baptist Church Early Childhood Development Center opened January 5, 1987, under Reverend Neal’s leadership. During the tenure of Reverend Ross-Lee the center closed May 31, 2006, after nineteen years of service.
The Church sponsored many programs throughout the year that included every auxiliary in the church. The Annual Women’s Day Celebration began honoring a “Woman of the Year” in 1990. Outstanding womenwere honored from 1990 until 2009. This recognition climaxed in 2011 when all women of Gill Creek were honored as “Women of the Year”. The Annual Men’s Day Celebration began honoring a “Man of the Year” in 1991. Outstanding men were honored from 1991 until 2009. A special recognition in 2010 honored twelve senior men as “Men of the Year”. A final recognition in 2011 was given to seven men for their service and dedication to Gill Creek Baptist Church.
The church ministries included the Deacons, Deaconess, Jubilee Choir, Missionary Society, Musical Choir, Program Committee, Pulpit Aid, Trustee, Usher Board and Youth Choir.
The church’s membership continued to grow as worshipers accepted the Invitation to Christian Discipleship
Reverend James P. Neal, Jr. resigned August 4, 1991, after fourteen years of service.

Several programs were initiated during Reverend Ross-Lee’s pastorate. The Ministerial Intern Program provided an opportunity for college seminary students who are interested in parish ministry to acquire hands-on experience. Brother Illya E. Davis was the first ministerial intern and was licensed by Gill Creek Baptist Church on Sunday, August 25, 1996. Also, initiated under Reverend Ross-Lee’s leadership were a Summer Youth Recital, the establishment of a Minister of Music position, New Members Orientation classes and the establishment of the Christian Youth Fellowship. The First Annual Family and Friends Fun Day, celebrating the one hundredth twenty second Church Anniversary was held on the church grounds September 11, 1993, and was sponsored by the Senior Ushers.

The Reverend Preston H. Winkler served as Interim Pastor of Gill Creek Baptist Church from August 2001 to May 2003. The Reverend Samuel B. Glover served as Interim Pastor from June 2003 to May 2004.
On July 26, 2003, Gill Creek dedicated the “Mary Barrow Walking Trail” in memory of the late Mary Barrow. This recognition was in honor of Mrs. Barrow, who served as president of the Health Care Ministry and who kept key health issues before the congregation.

On April 30, 2004, the Reverend Reginald T. Byrden was elected the sixteenth Pastor of Gill Creek Baptist Church. Reverend Byrden began his pastorate on May 30, 2004, using the theme “A New Beginning.” The Installation Service was held on July 11, 2004.

Under the leadership of Pastor Byrden the church adopted the motto, “The Church Where Everybody is Somebody and Jesus Christ is Lord and Savior.” On September 25, 2005, Sister Roni Dee Rosa Fulwood-Scott was licensed to preach. On December 17, 2006, the deacons ordained were Deacon Willie Bing, Deacon Randy Samuels, and Deacon Kenneth Worthy. On January 2007 Deacon Jonathan Stevens was added to the ministry. Several ministries were restructured. In addition, new ministries were added which included the Intercessory Prayer Ministry, the Youth Praise Dancers and the Job Placement Ministry. Reverend Byrden initiated the Men’s Bible Study, Corporate Prayer, the Annual “Trunk and Treat”, the annual feeding of the homeless during Thanksgiving and the annual “State of the Church” address.

Gill Creek Baptist Church was in a transitional period from August 2, 2013, to December 5, 2014. In the absence of a pastor, the church continued in faith under the leadership of the Deacons Ministry, Deacon Kenneth Worthy (Chairperson) and the assistance of the Reverend Doctor Joe A. Bush (son of the house). Other ministers served the congregation until the end of August. From September 2013 until December 2014 the supply pastors serving were Reverend Doctor William Wilson, Jr. and Reverend Doctor Major McGuire.
From September 2013 to August 2014, God blessed the congregation with twenty-one disciples. The congregation received ten members through their Christian Experience, six by way of Baptism, four through Restoration and one under Watch Care.

After many prayers and fasting, God answered and sent the Reverend James C. Woodley as the seventeenth pastor of the Gill Creek Baptist Church. Pastor Woodley began his pastorate on March 1, 2015. Installation activities were held on May 22, 2015 through May 24, 2015. A banquet was held on Friday May 22nd at the Brookland Banquet and Conference Center and the official installation service was held on Saturday May 23rd.
2016 CHURCH HISTORY.

Pastor Woodley continues to make a difference in the Gill Creek Family through his spiritual guidance, commitment, compassion and energy. The theme for 2016 is Faith in Action and the scripture is James 1:22 NLT, “But don’t just listen to God’s word. You must do what it says. Otherwise, you are only fooling yourself”. Modifications have occurred in the Sunday morning Worship Service. After his appointment here the Pastor has continued a weekly telephone devotional “Morning Glory" on Tuesday morning from 6:00am to 6:15am. Prayer service is now scheduled every Wednesday 11:30am – 12:00noon followed by the Study of the Word for an hour. On the same day evening prayer service starts at 6:30pm followed by Study of the Word for an hour. The Youth Study of the Word is held each third Sunday. The pastor has promoted growth in the weekly Study of the Word classes. The new Discipleship Class has been restructured and the name changed from New Membership Class. Classes are scheduled each second and fourth Sunday. He initiated and the members adopted a church logo and banner. The RELATE banner stresses the importance of the congregation to Reach, Empower, Love, Accept, Teach and Excite. Pastor Woodley has implemented the Harvest Hope Backpack Food Program, summer feeding program for school children, created a Greeters Ministry, started Lenten Season Worship services every Wednesday night, began Wednesday noon day Lenten Devotion and Prayer call, implemented a program to transport the homeless to and from church on Sunday, and facilitates leadership seminars.
The Deacons Ministry consists of Deacon Kenneth Worthy/Chairperson, Deacon Ceasar Leysath/Vice Chairperson, Deacon Willie Bing, Deacon Roscoe Bush, Deacon Willie Grier, Deacon Thomas McClees, Deacon Evelyn Moore, and Deacon Gloria Pryor. The Deacon Emeriti are Deacon Roosevelt Branch, Deacon Dorothy Fulwood, Deacon David Jacobs, Deacon Bernice Manigo, Deacon Doris Outen, Deacon Evelyn Worthy, and Deacon Hughy Worthy, Jr.

Current 2017 ministries
On July 16, 2017, The Creek Café was dedicated. This area is available to all, but especially for our youth, young adults, and seniors. Gill Creek is staying up -to -date on the latest technology. Improvements and updates can be seen on our Facebook, Twitter and Website. Online giving was implemented to provide members as well as visitors to the site with the opportunity to give at anytime, not just Sunday morning worship service. A television monitor was installed in the vestibule to highlight upcoming events and community news.

From September 2016 to September 2017 God has blessed the congregation with 25 disciples. The congregation received 20 through Christian Experience and Baptism and 4 Restoration and 1 through Watch Care.
We, the Gill Creek Baptist Church Congregation are still a strong foundation of faith, worshiping together as a family, hearing the preached word, saving souls, studying and meditating on God’s word, singing songs of praise, sending up prayers of thanksgiving, spreading the gospel to the community, and providing assistance to the less fortunate. We are a church where we Relate – Reach, Empower, Love, Accept, Teach and Excite. It is for us, the living saints, to be dedicated to the unfinished business of witnessing for Jesus.
History Revised September 2017 by the Pulpit Aid Ministry.

Choosing to get involved at "The Creek" is part of the reason why we exist. And ... We want YOU! Whether you are new to the Kingdom or ready to serve but you are unsure of where to start, then call us at 803-754-6616 or send us an email message at: